I’m not sure exactly how it all happened, but it seems like from the time I got pregnant until I had a toddler, I somehow stopped believing that I was capable of expressing my creativity. 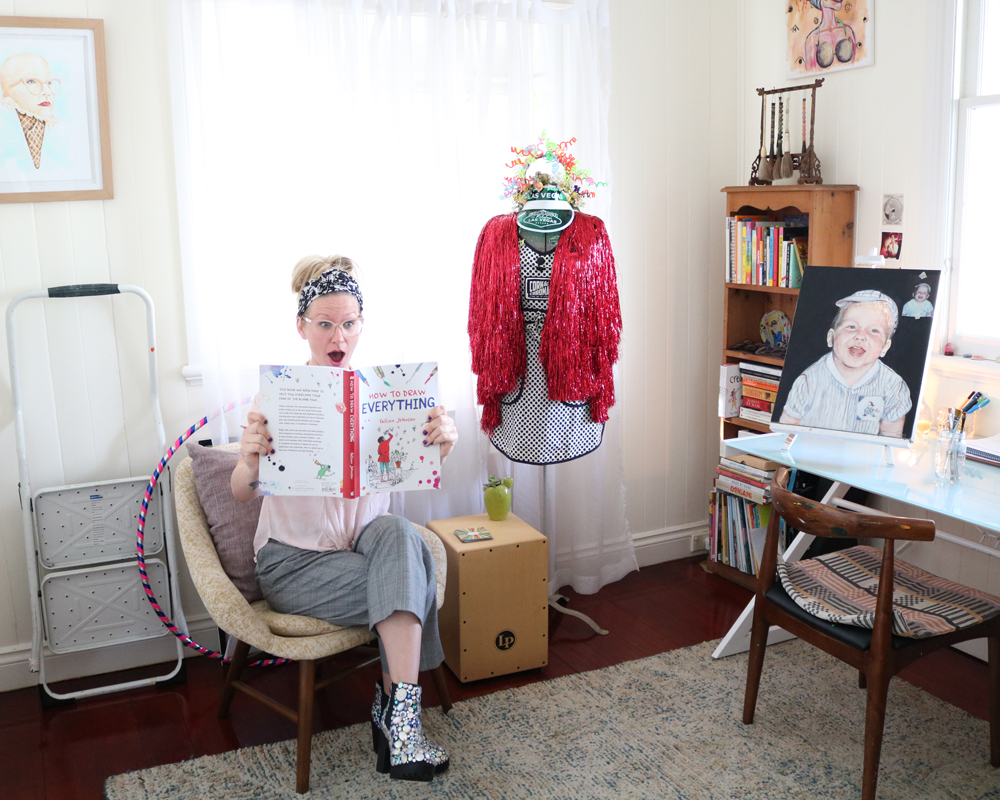 I think I told myself that I had stopped making things because I couldn’t make them the way I could before. See, before all of this baby business, I had a very romantic relationship with paint. My favorite state of being was when my paintbrush and I would stay up late painting abstract cosmic spacescapes, sometimes until two or three in the morning, listening to zen beats and totally lost in this world, orbiting elsewhere. Somewhere in my own universe. Where unexpected and delighting things could come out of me and burst onto the canvas. I was new to painting from my imagination (versus from a reference or an idea) and I was starting to like the things I was making. Sometimes the things I would paint were really interesting. They made me think, and wonder how that was inside of myself and I didn’t know it. That space was my happy creative place. But now I can’t exactly do that. I can’t stay up late, painting for hours on end. I have someone else, a tiny amazing person, who needs me and wouldn’t be able to allow me a long enough tether to travel to my own galaxy. I thought that maybe I just couldn’t do it anymore. Maybe my best years of creating were past me. Maybe those paintings hanging in our hallway are alone what will live to tell my story as an artist. Maybe I’ll be one of those moms who end up lamenting ten years too late that they lost themselves in the chaos of motherhood. I didn’t want to believe it, but maybe that is every mother’s path, in a way. I wasn’t sure. Because I couldn’t create like I knew how to before, I decided I couldn’t create at all. I disengaged with the idea of making meaningful things. I puttered here and there, tried some different mediums (I did a few consecutive days of drawing with markers), but ultimately didn’t feel I could access that creative part of myself. She was a younger, less responsible version of me, on a permanent holiday somewhere else. My paints stayed in the closet, my brushes lonely on the shelf. Canvases, primed and ready, stood waiting for longer than I wish they had. I started to resign myself to the idea that my best days as an artist were over. But then I had a project come up: a painting I wanted to do for my mom.

For as long as I can remember, my parents have had two portraits hanging proudly in our living room. Both pieces are oil paintings in ornate gold frames. They are portraits of my sister and I at age one, that my mother had commissioned by an artist. She meant to get my little brother’s baby portrait painted, too. When he was four or five, my mother posted the reference photographs to the artist, hoping for the portrait that would finish her collection. She got the letter back not too long after, with a stamp marked “Return to Sender”. The artist had passed away in between painting my portrait and the time my mom had next contacted him. 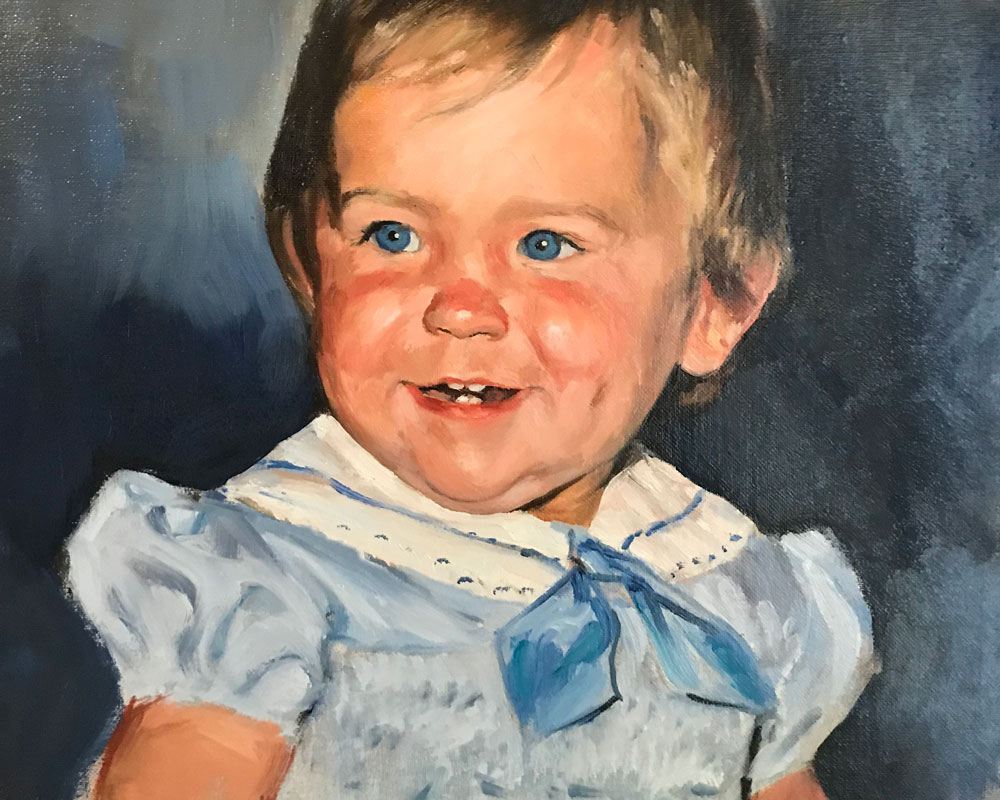 A year ago, we were in my mom’s basement and she handed me a stack of three or four photos of my brother at age one. These were the reference photos for the painting, she explained. I asked if I could hold onto them, and I’m pretty sure she forgot that she gave them to me. I had the idea that I could finally finish this project for her.

I put the reference photos that Mom had given me on the wall in my studio, and looked at them on the wall for more than half a year. Finally, something magical happened. Maybe my daughter Sunny was in a great mood that day, or maybe I was feeling extra capable. But I stared that photo down and then I went straight to the store and bought a canvas. That night I got the projector out, planning to take it easy and just lay down the blueprint in pencil. But then something really magical happened. I ended up staying up until midnight painting the first few coats on. I couldn’t stop myself. I had the energy, I had the inspiration. I had reaquainted myself with my own insatiable creative flow.

My mistake was thinking that I had to do it all at once. But I didn’t have to be as quick as I once was. I didn’t need to finish this project or get it off my desk—this one was for me, and my mom. I allowed myself to enjoy the process, each tiny step helping me think of the next, each brushstroke informing my next idea. We make a series of choices when we create. Each choice matters, and each helps us reach the finished result. Our creativity is not commercial. It doesn’t matter if we’re ‘productive’—it’s all productive. It’s experimental. 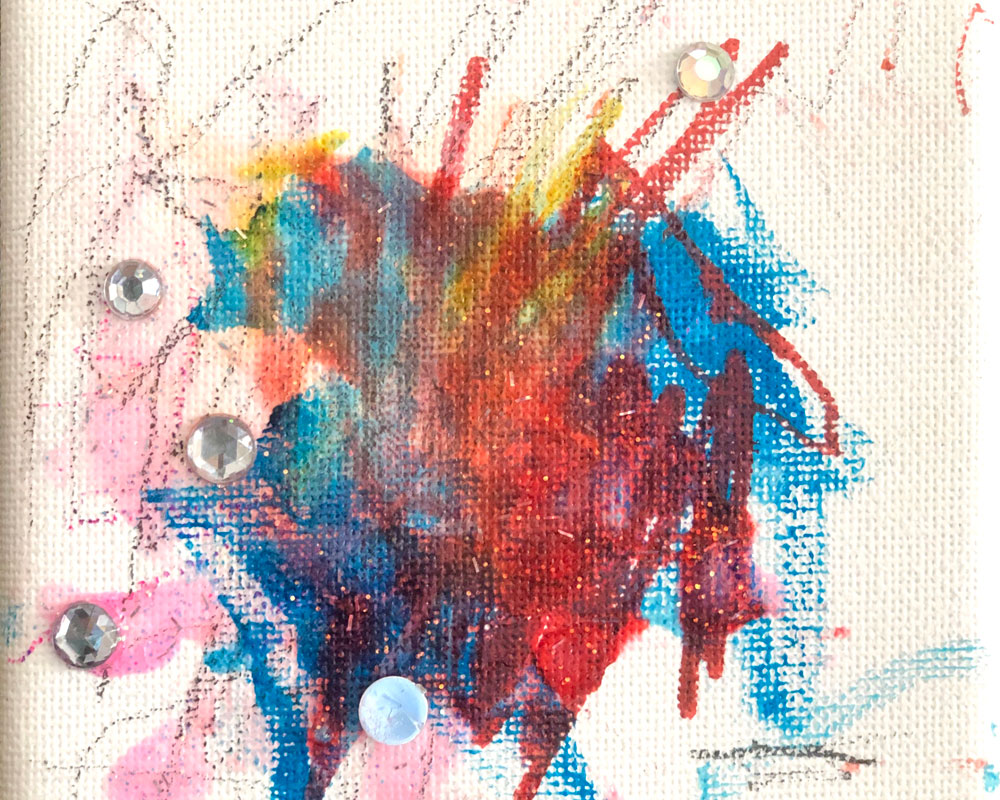 I know that even though I am now an artist with a child, I can still create. Typing it like that seems silly. But I can’t help but wonder how many other creative people have gone through a similar situation when they’ve had someone new come into their life.

New. That’s the word. I can still tap into my creative flow, but it’s a new process now. It’s a new little set of boundaries to see what I can do within. If we let our boundaries define our potential, we’re not using our creativity. Your creativity is what’s always there, and your limitations are what you can play off of. You are the sky, and your limitations are the weather. Sometimes in our company meetings we begin with drawing games, for example, drawing a self-portrait in three minutes. We’re obviously not going for the best self-portrait we can do. There are limits to the game. But sometimes those little three minute doodles are brilliant!

I finished the baby portrait. It took me about six weeks—before Sunny it might have taken two or three days. But I reckon this is the one painting project that I’m most proud of.