It’s here, Cork & Chroma’s Capsule Collection 001! A bunch of very cool, skilfully designed, and lovingly executed painty merch. We’re talking Paint & Sip Mug, Thick Creative Diary, Brush Clutch, Paint From Home Palette, and more. This collection was designed by Jacinta Conza (JC). She worked closely with Cork & Chroma founder, Hillary, to hone the concept and design brief to create products for the hobby painter or creative enthusiast, items that are not only useful but will inspire and cheer you on with your creative ideas and projects.
This collection took time and a lot of love and care. JC has kindly written about her experience working on this project with Hillary. This is an insight into the creative process, design and production of some of the products plus a few golden nuggets of advice JC has for others daring to pursue their creative ideas. Before starting this project, I was in a bit of a creative rut. Even once the project commenced, this rut prescribed me a hefty dose of not-good-enough-ness. I was afraid of what I couldn’t do but, in reality, I should have feared what I would do and the mistakes I would make. *haha* But with mistakes (and a very trusting, collaborative client) came lessons. Allow me to elaborate.

When I was struggling to know where to start with this project, I turned to a book called Feck Perfuction: Dangerous Ideas on the Business of Life by James Victore. In chapter 11. You, the reluctant hero Victore says:
“Dragons are real. Heroes are real, too. We all have dragons but we’re not all heroes. Like the children’s books say, dragons guard the reward, the wealth, or the love the hero seeks… For most of us, our dragons aren’t physically embodied as wings and scales and fire. They’re actually worse.

Every morning my dragon curls around my shoulders and quietly snarls into my ears, “Failure, failure, failure.” I’m reluctant to face it. It’s easier to accept the idea of failure — to accept that I’m a failure — than do anything about it. It’s easier to stand down, stay in bed, and not risk failure by not risking… anything. This tactic doesn’t make the beasts go away; it makes them bigger.”

So I got out of bed and decided to risk everything, by taking a risk. I began doodling my dragons. What might they look like? Maybe a lizard holding a stop sign, since they were rudely halting all of my productive mental traffic? The dragons in my doodle started to morph into sharp shapes with eyes, resembling something of a devil that might also sit on ones’ shoulders. But what about the angel on the other shoulder? What about the good dragons? The ones that cheer from the sidelines with creative encouragements like your mum might do at your netball game (not specific to me at all). So my dragons started to turn into kind little monsters — orbs with sm-eyes (smiling eyes). That day I didn’t ‘stop’ doodling dragons and ‘start’ working on the C&C collection — One task bled into another and these shapes with curious eyes turned into the mascots for the collection with some inspiration from the collage art of Henri Matisse. Turns out what felt like procrastination, changed the trajectory of the project.

P.S: Procrasti-baking is definitely procrastinating but could also easily spark your next big idea. They say never work with children or animals. I’m all for avoiding the children part, but when it comes to working with friends, and the pets of your friends — I couldn’t vouch harder. There’s nothing cooler than supporting your network of creative friends and having them support you. This project was less like commissioned work and more like a collaboration; the best-case scenario for any client relationship — A “double handshake moment” as coined by Blaire Enns.

What I do know now after running a business and working with a number of small businesses is that the unseen effort that goes into doing what they do, is equal to a lot of blood, brainwaves, sweat, tears, and iMessage threads. When you have the opportunity to support small businesses, you’re making a real difference to their day, week, or even month. That’s why it was really exciting to be able to utilise the skills and spaces of our friends, for example at CampCUp & Vector Etch. In our case, there were a number of moments with Hillary via iMessage when either of us would say something to the effect of “Hey, I have this thought. It’s kind of sh*t but has the potential not to be sh*t but I just need to flesh it out with you.” This was followed by a photo of some weird half-baked DIY idea.

Although working with friends and family is often advised against in the design / creative world, when done right it can be ✨magic✨. I won’t pretend to know the formula for how to make it go ‘right’ but working with someone who you mutually trust and respect creatively is a good start. Often when working with a client, you have to maintain a certain level of polish and present as though you have all of the answers, all of the time, no matter what, no questions asked, here they are. Answers. It was nice to be vulnerable for once. It makes the process human. And oh boy, were there a lot of human moments. Hillary and I scoured the World Wide Web for the stunning Mountain Dew coils that feature on the Thick (A4) Visual Diary and eventually found a U.S supplier, paying a not-so-cute fee for express global shipping. Of course, we’re in a global pandemic so naturally, they arrived 6 weeks later 🤦🏽‍♀️. Once they did land on home soil, we realised that my inability to factor in page GSM (grams per square metre aka thickness) saw our oversized coils being too SMOL for the planned page count. 🤦🏽‍♀️

Since we had prepaid for and the printers had pre-trimmed our premium 150GSM Envirocare stock to size, we couldn’t refund it. ✨ Insert Plain Jane colorway, pictured below (right).✨ We had the leftover stock, and we knew we could source translucent coils locally (no 6-week wait) and found some sick translucent buckles from an offshore supplier. I convinced them to sell us 50 units even though they had a MOQ of 100. They sent 47 🤦🏽‍♀️ You wouldn’t read about it! (Except you are now) At least it was express, I guess?

Good luck, bad luck, who can tell? I personally love a translucent moment. 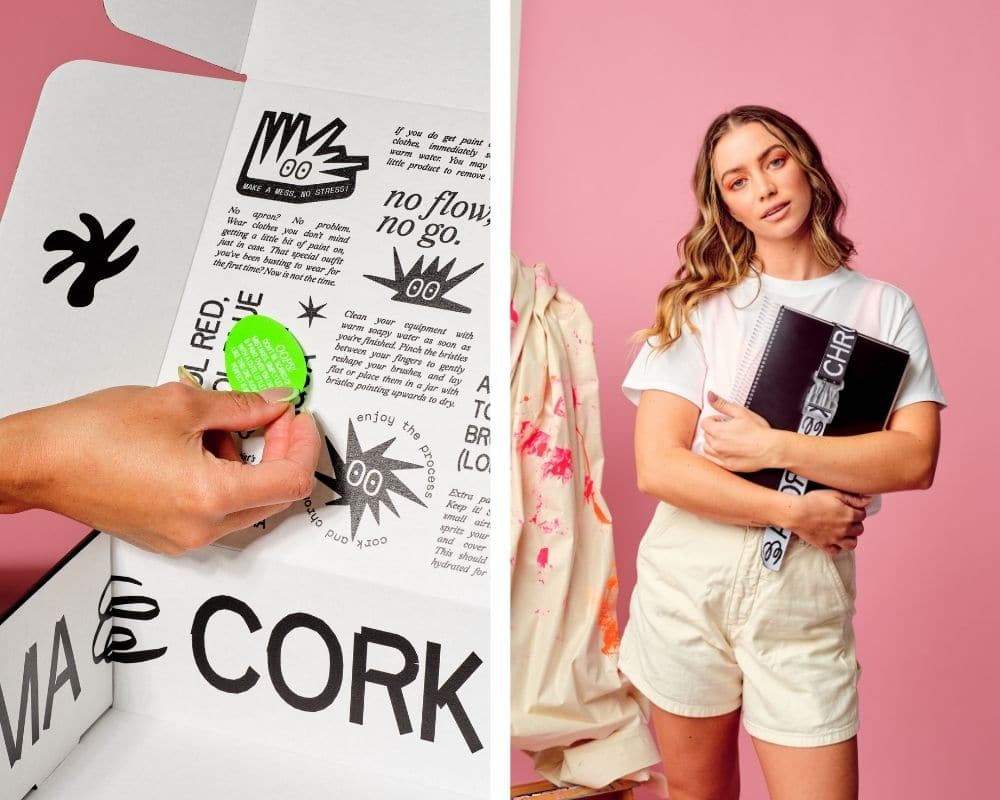 And if there was one photo that could sum up the panic attacks I had in the duration of this project, it’s the Gift Box image above (left). By this stage in the project, we had made a habit of making mistakes that felt irreversible and fixing them with flare but this one still hurt. I’m not a painter (only when I’m at Cork & Chroma of course) and apparently, I also don’t know the basic colour theory (which I FOR SURE should).

On the lid of the box, there were meant to be 2 colour mix tips and I totally f*cked it up by copy and pasting another colour tip and not editing it correctly. Turns out Cool Red and Cool Blue doesn’t make Aqua lol. Instead of creating an inconspicuous sticker to cover the f*ck up with the correct colour combo, we decided to poke fun at ourselves and point out the very idea of creation with freedom — don’t be scared of mistakes, especially when it comes to painting, you can just let it dry and paint over it!

Make sure to proofread everything, thrice.

“My own dragon never leaves me. He’s there every morning, despite having been defeated numerous times. Heroes are the reluctant ones with the courage to face their dragons. Every damn day.”

Bridle Your Backbiter and Slay Your Self-Doubt

Get Equipped for Paint and Sip: Your Artist Tools 101